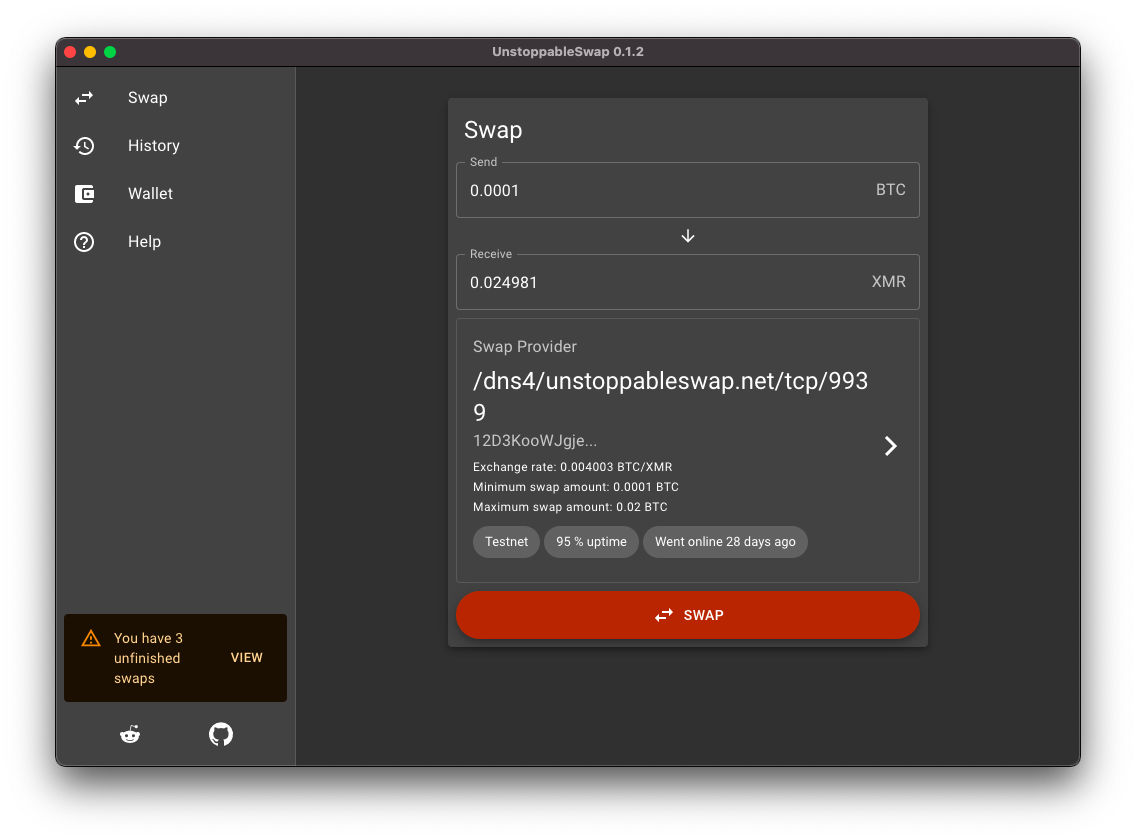 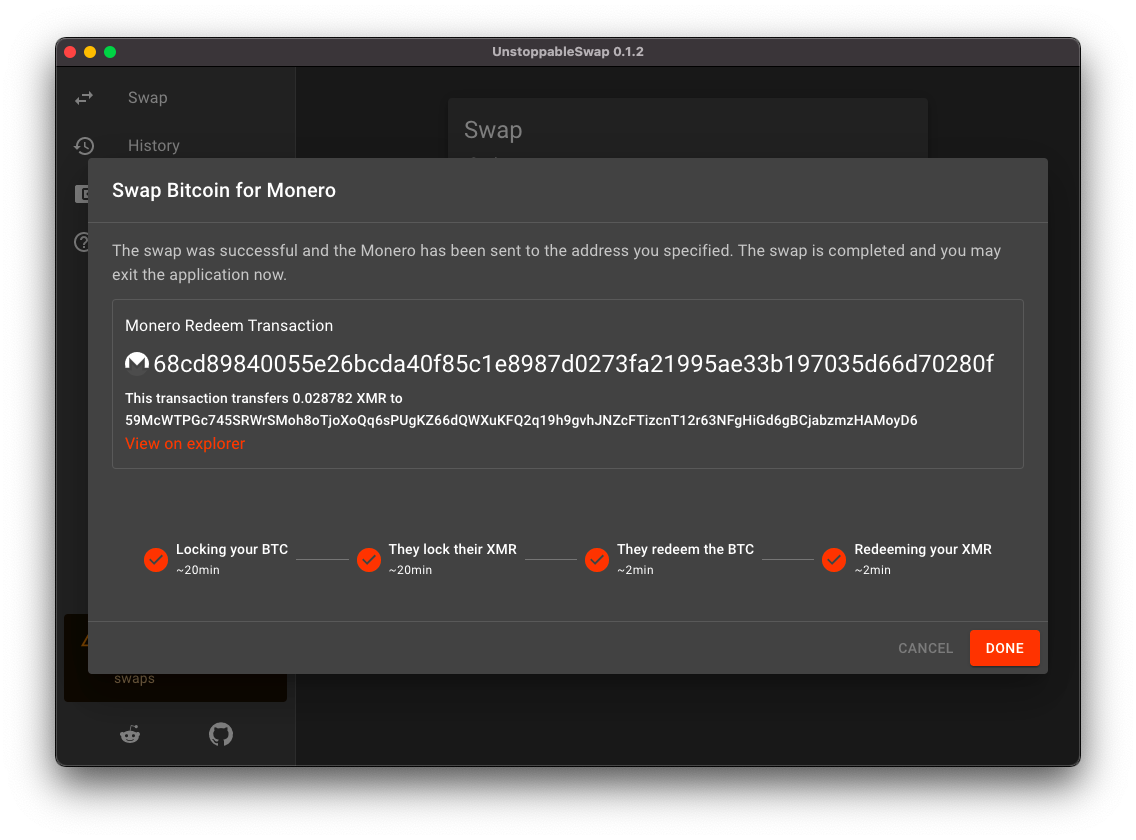 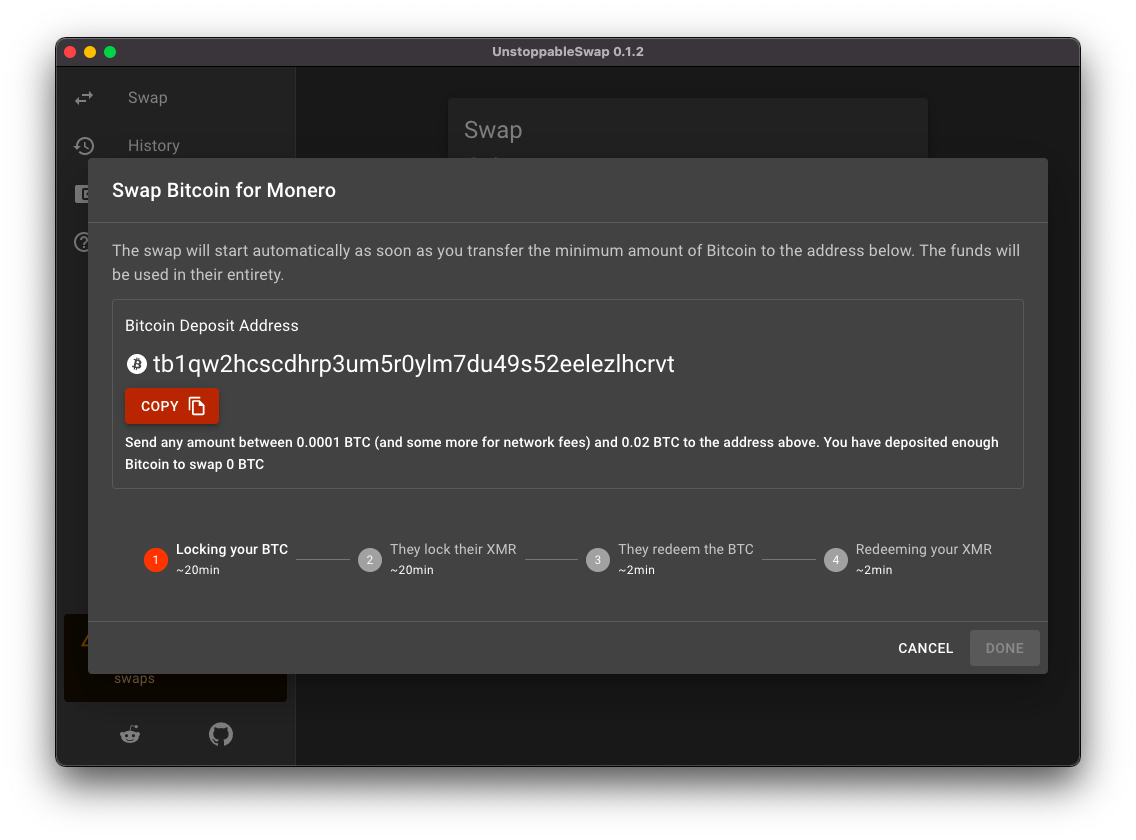 We've successfully completed all of the goals we set for ourselves in our first CCS proposal. The prototype of the GUI we wanted to develop is fully functional (on testnet) and it will soon replace the now obsolete web interface (UnstoppableSwap.net). Based on the community response to both of our status updates (reddit post 1, reddit post 2), we felt that there is a strong desire in the community for us to continue development.

Over the course of 7 months we have:

We are excited to keep working on Atomic Swaps. There are still loads of things needed to make it accessible and easy to use for everyone. Therefore we'd like to continue spending our time working on the FOSS GUI for BTC<>XMR Atomic Swaps. It is being built around the swap-cli and will empower even non-technical people to swap their BTC for XMR in a safe, decentralized and trustless manner. We are asking for 232 XMR for continued development for 4 months. At the end of each month 37 XMR will be paid out. We will work approximately 25 hours per week for 4 months straight which amounts to 400 hours of labour. Our hourly rate is 66 USD which amounts to 232 XMR at a current price of 112 XMR/USD

I am binarybaron, the creator of UnstoppableSwap.net and Monero enthusiast. I was excited about Atomic Swaps from the very beginning, tested the first versions (MVP developed by COMIT guys) and contributed to the project early on. When the first testnet swap provider came online, I realized that we would need a better user interface and a platform to compare different swap providers. I decided to start building UnstoppableSwap.net. To my surprise, the interest was much greater than I could have ever predicted. In the first week alone, the website was visited more than 150,000 times. Once I realized that a website was not enough due to the technical requirements, I started working on a desktop app. Soon after, I submitted my first CCS, which was quickly funded, and developed the first working prototype of the desktop user interface.